Toronto, Ontario, March 31, 2021 – Compass Gold Corp. (TSX-V: CVB) (Compass or the Company) is pleased to provide an update on the recently completed first-pass drilling on four areas on the new Moribala permit, located on the Company’s Sikasso Property in Southern Mali (Figure 1).

Compass CEO, Larry Phillips, said, “I’m pleased to report our initial drilling on the Moribala permit has been highly successful, where our discovery team has identified a large, promising new target consisting of a wide zone of shallow mineralization with strong gold grades. This new prospect, called Dafaraba, was a blind target identified using ground geophysics and shallow soil anomalism. The structure remains open for at least one kilometre along strike and at depth. It displays the same geophysical characteristics as the gold mineralization we intersected previously at Tarabala and Massala West.”

He added, “We also conducted limited drilling at three other locations on the Moribala permit, where we found two more areas on clearly defined faults with encouraging mineralization. Our next priority is to look for strike extensions of the mineralization and identify areas with higher gold grades at depth to determine the full potential of this discovery.”

Dr. Sandy Archibald, PGeo, Technical Director, added, “I am delighted with our success at Dafaraba, and we are anxious to initiate additional ground geophysics to the north and south of the mineralization to determine the true strike potential prior to follow-up drilling. Transferring our knowledge from the exploration we performed at Tarabala and Massala West over the last 18 months has paid dividends on this new, exciting, and highly prospective permit. Mineralization was encountered in an area devoid of outcrop and artisanal workings but exactly where our previous fieldwork had predicted. The width of the mineralized zone is similar to that encountered 11 km to the north at Tarabala, including higher-grade intercepts such as 7 m at 1.01 g/t Au, which is highly encouraging.

Interestingly, the newly identified mineralized structure at Dafaraba is also present over a distance of 3 km on our Sankarani permit to the north. The fault is associated with soil samples up to 433 ppb Au, and we look forward to further investigating this promising area as well.”

AC and RC drilling will be carried out at Dafaraba and Dankoun to determine the strike and down-dip extension of mineralization. More drilling will also be performed at Nglokouna to target additional structures coincident with the workings. The Company has identified three other areas at Moribala where Gradient IP surveys will be performed to refine future AC drilling targets. The knowledge gained during the current work will be applied to areas on Compass permits to the north to identify new exploration opportunities on untested structures.

Compilation work continues at the Morila permit block located close to the world-class Morila mine. This work is focused on compiling and interpreting historic information in conjunction with a satellite alteration and structural study.

Forty-three shallow air core (AC) holes (2,110 m) were drilled in six fences on the Moribala permit (Figure 2) in mid-February to early March. Most of the holes were drilled to test strong to moderate gold anomalism found in shallow soil samples, as well as clearly defined targets interpreted from ground Gradient Induced Polarization (IP) geophysics. Two holes were drilled on an area of workings with slight soil geochemical anomalism, but not associated with the two large faults bisecting the permit.

The best mineralization was reported from the Dafaraba area where a ten-hole fence and a two-hole fence were drilled 270 m apart along a 930-m target corresponding to the Moribala Fault (Figure 2). The predicted mineralized structure was encountered in drill hole MOAC012, with a 7  m @ 1.01 g/t Au (from surface) interval intercepted within 21 m @ 0.50 g/t Au (from surface.)  The mineralization is interpreted to be steeply dipping to the west. Two mineralized intervals were noted in hole MOAC011 to the east, including 1 m @ 1.09 g/t Au. Hole MOAC020 drilled 270 m to the northeast intersected minor mineralization (1 m @ 0.48 g/t Au from 28 m depth) indicating the structure is present along strike. This same hole contained a 4 m void at shallow depths (15-19 m) suggesting vein material had likely been removed by artisanal miners. A longer drill fence line is needed to ensure that the structure is adequately tested.

Two short fences (9 holes, totalling 436 m) were drilled at Nglokouna in the northeast of the Moribala permit over the interpreted Tarabala Fault zone (Figure 2). Ground geophysics indicated the presence of at least four northeast-trending structures cutting the artisanal workings present over a distance of 1.8 km. Narrow intervals (1 m) of gold mineralization were noted in two drill holes, with grades less than 0.6 g/t Au. Additional drilling is required to fully test this prospect, which includes a newly-identified structure that appears to be related to a shallow soil sample that contained 43.6 g/t Au.

The longest fence (20 holes, totalling 981 m) was drilled at Dakoun in the southwest of the permit on the Moribala fault. This area was selected for drilling based on the presence of sporadic artisanal workings found over 2 km and a width of 350 m. The workings correlated with several north-east trending faults, and a disrupted chargeability zone, both determined by ground geophysics. Seven of the thirteen holes drilled across the main 350 m anomaly were mineralized, with the best intercept being 2 m @ 1.12 g/t Au (from 21 m).

Finally, two holes (totalling 93 m) were drilled over the workings at Million-ki. This area was associated with weak to moderate soil anomalism and up to 600 m of scattered historic artisanal workings. Drilling identified abundant quartz veining, but it was not mineralized. 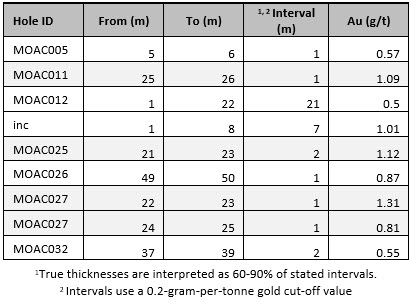 As noted previously, working in Mali has not been without its challenges. The global Covid-19 pandemic, combined with economic stress and extremist security threats in the northern regions have resulted in a military transitional government that is struggling to restore a stable democracy. Notably, several international mining companies operating in the area have reported that these issues have not impacted their operations. Also, a number of companies have recently announced increased resources, while others have successfully raised investment funds for their exploration work there. Compass continues to actively monitor the situation and so far, has been able to conduct its work without interruption or unusual safety risks for its team.

Compass, a public company having been incorporated into Ontario, is a Tier 2 issuer on the TSX- V. Through the 2017 acquisition of MGE and Malian subsidiaries, Compass holds gold exploration permits located in Mali that comprise the Sikasso Property. The exploration permits are located in four sites in southern Mali with a combined land holding of 1,143 km2. The Sikasso Property is located in the same region as several multi-million-ounce gold projects, including Morila, Syama, Kalana and Komana. The Company’s Mali-based technical team, led in the field by Dr. Madani Diallo and under the supervision of Dr. Sandy Archibald, P.Geo, is conducting the current exploration program. They are examining numerous anomalies first noted in Dr. Archibald’s August 2017 “National Instrument 43-101 Technical Report on the Sikasso Property, Southern Mali.”

All AC samples were collected following industry best practices, and an appropriate number and type of certified reference materials (standards), blanks and duplicates were inserted to ensure an effective QAQC program was carried out. The 1 m interval samples were prepared and analyzed at SGS SARL (Bamako, Mali) by fire assay technique FAE505. All standard and blank results were reviewed to ensure no failures were detected.

This news release has been reviewed and approved by EurGeol. Dr. Sandy Archibald, P.Geo, Compass’s Technical Director, who is the Qualified Person for the technical information in this news release under National Instrument 43-101 standards.